skip to main | skip to sidebar

April 19th:  Rode to work as usual and in the morning took the kids to of all places, the Aquarium. Miles: 26.

April 20th: Picked up a kid's friend, V and got some driving time and practicing in and then took the kids to try out Musikgarten. The kids really liked it. Then we picked up Claire and they went to IKEA while I rode up to work and back. Mileage 20.

April 21st: Kidical Mass with Julian and many more. Left the wife and kids at the ride at the end at the Peddlers Fair.  Rode out to Bellevue to teach at AMNW from Ballard and then to rehearsal at UW which went super late. Rode something like 50 miles, pulling a trailer. Then late at night, took the bus back out to Ballard to pick up the Dummy and the kids bikes which were still locked up by the Ballard Bridge. Rode back over the bridge which even though it had a lane closure, I happened to ride over with a couple of fixie dudes headed to a party. It was a nice day.

April 22nd: This was fun. We rode to church together with T on the trail a bike with Claire, and A with me on the Dummy. Then we went to Discovery Park, then Myrtle Edwards, lunch at Anthony's, more play at Seattle Center with lots of tag and great popsicles. Wore the kids out but apparently not enough because they didn't go to bed until super late. Dan and Rebecca, two cycling travelers from New York-Davis CA came by and are staying with us for a couple of days. Total mileage around 20.

April 23rd: Took the kids to the blue heron rookery in Lawton then to the playground and biking with friends, then pho, the kids now full, nearly fell asleep on 15th west which despite what people in Magnolia will tell you, is just a glorified 7 lane freeway with dangerous cross traffic. Then after the kiddies had a little rest and relaxation, we met up with our guests and Claire at Der Berliner for Doner Kebabs. Then we rode over to Denny park to ride the zip line and play with a found jump rope. Kids got tired, went to sleep super well and I got the bike parking spot cleaned up for the first time in years. It was nice. Total mileage 16. 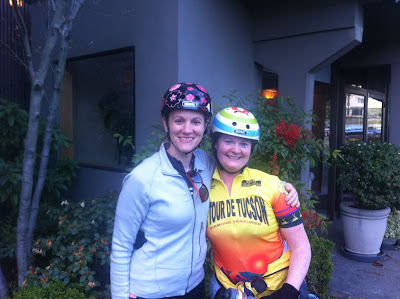 Claire on the left, Kristina on the right. Kristina organized the first Westbrook Weekly Wednesday Wramble of 2012 and the Hawkins were the ones who bit. Because we represented 80% of the riders, the ride started at our house. 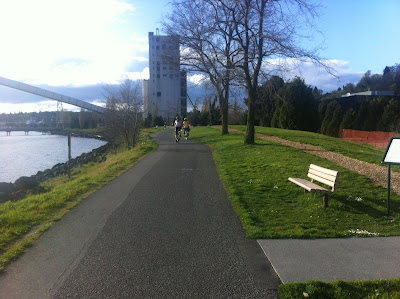 We cruised down the sculpture park and then let the wind carry us up Myrtle Edwards. In this photo, I've just been gapped and in the next, T is exhorting me to get the led out and chase the girls down. The only catch is that I'm the one hauling the family so acceleration is somewhat freight train-like. 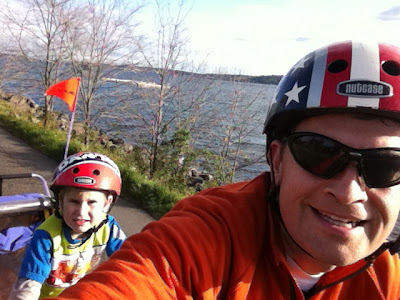 Speaking of freight trains, we made it down to the train bridge on the way to the locks but while waiting and trading stokers (A tried it out and demurred) none came. 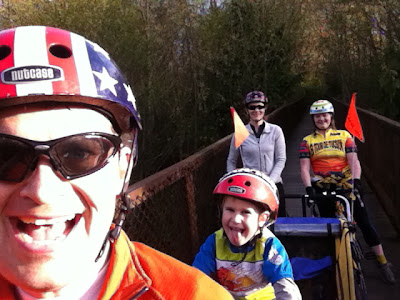 The locks turned out to be our turn around spot and we played a massive game of Duck Duck Goose and found flowers as big as our heads. 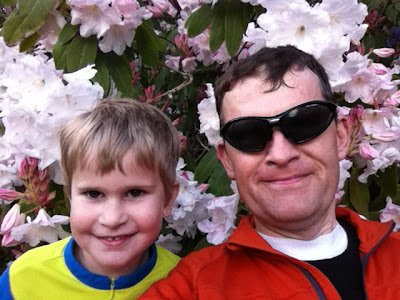 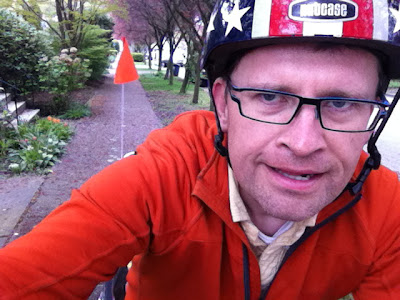 Sometimes I take the sidewalk on a big uphill. Whew! Dravus east of 15th West.
Putzed around the morning until 9:30 and then took off or Soccer/basketball practice for T and one on one with A. After, we had lunch and went to Discovery park where T and I got into some stinging nettles but T handled it really well and before you knew it, he was swinging on the swings and ready for play.
We stopped for corn dogs at the Interbay QFC and then marched, or dragged the kids up Dravus and onto Queen Anne for swimming lessons. 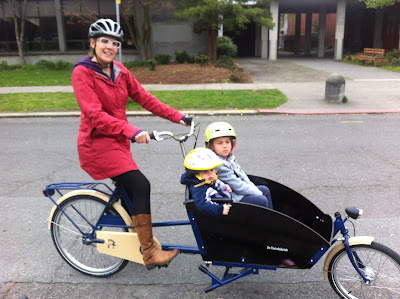 Ran into Bonnie Rough who is a dedicated cycling mom and had a fun chat about varying styles and qualities of box bikes, then we carefully coasted down Q.A> ave and made it to Seattle Center where we warmed up and saw the coolest fire show ever where somebody put a P.A. speaker next to a flame and got it to change intensities with the sound.
T schooled me at checkers and then we both helped somebody's younger brother get back into the game of a chess and then called in some really tasty pizza.
The kids went down late and so perhaps the morning will be nice and slow and I can get some photos put in where I want them.
Mileage: 9. Trailer was used because the kids are getting tired of the rain, and frankly, I'm looking forward to some sun too.
Posted by brad at 12:25 AM No comments: 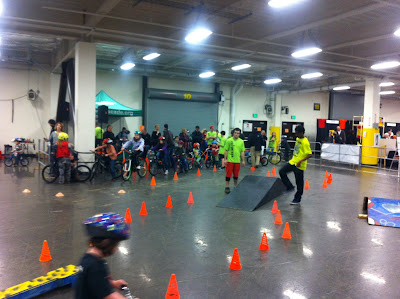 This was substantially before today's ride but it underlines the fun biking T and A are getting in these days. We went down to the skate park and it was super busy with the typical juvenile delinquent types who try to strafe T just to get him off the park, but T was having none of it and I had to pull him off the park when A had to pee. Bathroom breaks are the lowest common denominator in the life of a parent of young children.
I can't really picture where I went or what I did Monday but it was super fun and bikes were ridden. Wait, we went to the library twice and had lunch with Claire. We found some cool piano teachers for T and then it was the Seattle Center and children's museum where the kids got to play Ladybug Girl just like the books.
Then it was off to Alchymeia rehearsal preparation where we have a CD release party Friday night at Empty Sea Studios in Phinney. Took the electric cello, effects processor, stand, music, and cables in much less space and just a little more weight than I have with the large cello.
Mileage 6 with the kids and 11 for rehearsal
Posted by brad at 12:13 AM No comments:

30 days of biking: April 15th: Rode to the concert and to church 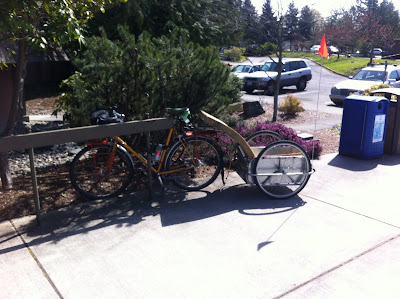 Had a concert at Shoreline Community College today with Jensina Oliver and Robin Peery. This was something I have been practicing a lot for and it turned out great! The weather was fantastic and I biked up some rather sketchy roads, specifically 3rd Ave NW north of Holman Road which inexplicably has sharrows on it but has tons of traffic trying to escape the lights on Greenwood. It also has no shoulder and the drivers really think that anyone in their way is trespassing.
So I biked up into Magnolia for church and took the regular route up the Magnolia Bridge, then left early and had my mom take my place teaching the kiddies to sing. Then the ride up to Shoreline took about an hour. Played the concert, shook lots of hands, made some new friends, and helped people really appreciate Leonard Bernstein's later music. It was great.
Rode home, T was ready to go ride, and away we went to Seattle Center to play with cars and ride B-bikes. While there, we saw a flag football scrimmage and saw a private birthday party at the Children's Museum.
I was pretty spent and fell asleep before the kids did. They are up right now and it's 10:35. Claire let them nap. I think that I'll go back to bed and put the photos up tomorrow. Stay tuned.
Posted by brad at 10:27 PM No comments:

Saturdays are the day that I typically ride to Bellevue for Academy of Music NW, but the van's sliding door has been popping open at speed and I needed to figure out how to fix it. This required driving. I expected to get a ride in for our Saturday date to a friend's house but then another friend picked us up. Thus no biking. How about that? Go directly to jail, do not pass go, do not collect $200.
Mileage: 0!
Posted by brad at 10:24 PM No comments:

30 days of biking: April 13th: Visit to the Shoe Bank and two concerts 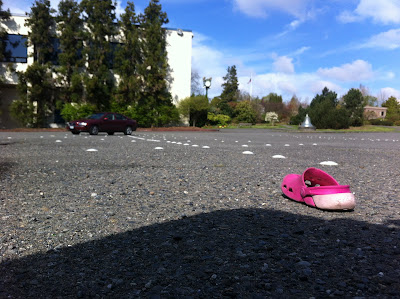 This is the shoe bank. It's where little 3 year old girls leave their shoes so that doting fathers and come up with a pretext to take another bike ride. This bank also doubles as the parking lot for the Washington Museum of History and Industry or MOHAI. We had come here for a 520 bridge meeting the day before but had left a shoe in the parking lot. People don't seem to steal kids shoes and when I went back the next morning, it was still happily there and waiting for me. 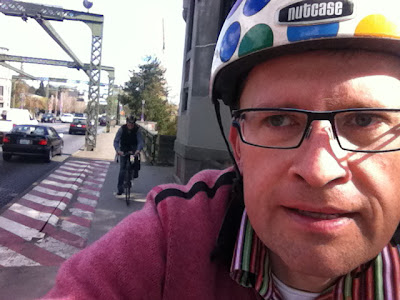 I rode down to MOHAI with Ansgar with whom we have had some nice bike tours. He takes the bus to the Soft, and I was trying to find a shoe and a pump bracket. I went home and practiced my cello and then raced up to spend the afternoon with the family before T's piano recital. 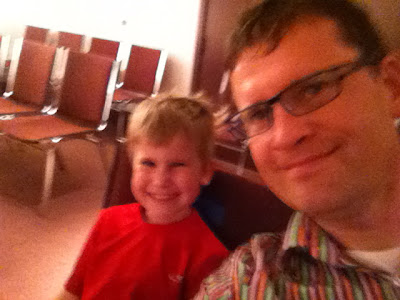 This is T at his piano recital. He played very well and I was proud of the little guy. The concert took place at Sherman Clay Pianos and Claire dropped us off after cancelling due to an inconsolable, shoe losing, toy dropping, face scratching 3 year old demanded her complete attention. We then bused home and got doughnuts, and then bused some more. 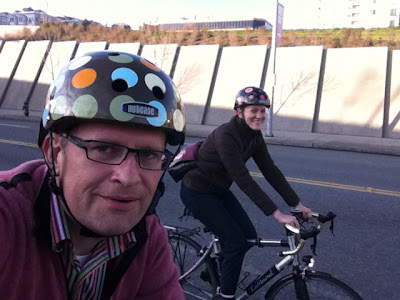 Here is the best part. I had a concert down town and had arranged for child care so that Claire could come with. We biked down together through Mariners traffic and I played the show, which wasn't too great but will be better next week when we have our official CD release party. Riding together on a date reminds me of before we were married. In fact, Claire is still riding the same bike as in those salad days.
Total miles: 18
Posted by brad at 11:36 AM 1 comment: